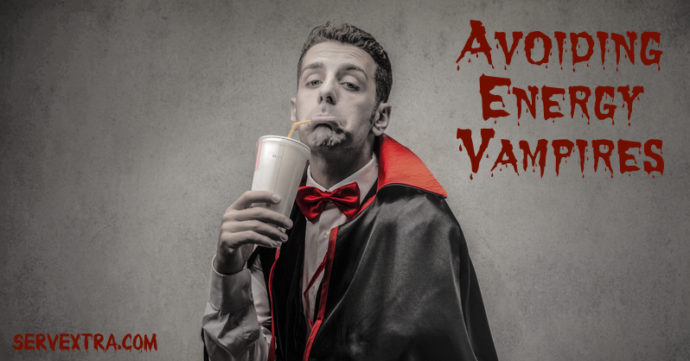 I once worked with a lady that was an absolute energy vampire.  She could find the negative in any situation.  When we hit our sales numbers, she would say,  “Now we just have to do more next month.  He is never happy.”  If someone had a baby she would say, “Great.  Now we all have to work to cover her hours.”

If left unchecked, the energy vampire will cost you time, money, good people, and possibly your future.

This post provides you with the skills you need to detect, and slay your energy vampires.

How to Detect an Energy Vampire

The energy vampire doesn’t have fangs, so you must develop some detection skills to identify the vampire.

Here are tell tale signs that you are in the presence of an energy vampire:

These are the top 6 signals that you are in the presence of an energy vampire.  Be warned, and be prepared.

How to Slay the Energy Vampire

Now that you are armed with the skills to detect and slay your energy vampires, it is time to take action.