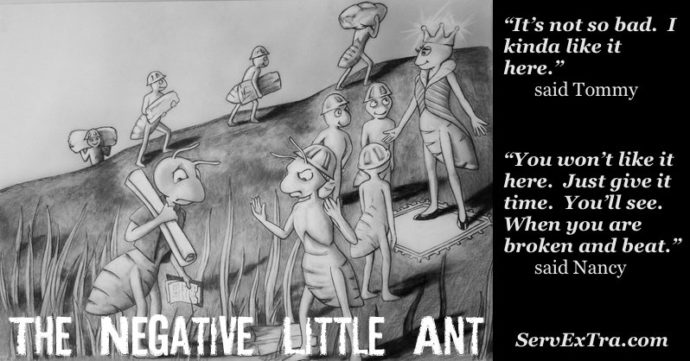 Negative people can do some serious trash talking about their team.  You’ll find theses negative Nancys gossiping by the water cooler, the dumpster, out back, and other shady places.  Through whispered voices and puffs of smoke, negative people are destroying themselves and others, word-by-negative word.  RELATED – The Success Tune-up

Here is a parable that is based in truth.

Tommy was a little ant in a big colony.  When he first joined the colony, he was happy to toll away at his work.

“I love my work!” said Tommy

“Tommy, I’m so happy that you do!  You are a great worker, and you are important.  Without you, the forrest wouldn’t be cleared, and the colony wouldn’t be fed.” said the Queen

Tommy loved being a part of something so important.  He cleared the forrest and fed the colony.  The colony needed him!

Soon, Tommy got promoted.  It wasn’t long before Tommy begin to believe that he could make his way to the top of the colony.

Nancy had a hateful attitude.  She felt that all the other ants were morons for happily going about their work.

“Can’t they see that they are just wasting their time?  The Queen is selfish, and doesn’t care if you break your back.  Just look at how little she gives you, and how much she gives them.  They have the better jobs, and they get the better life!” said Nancy. 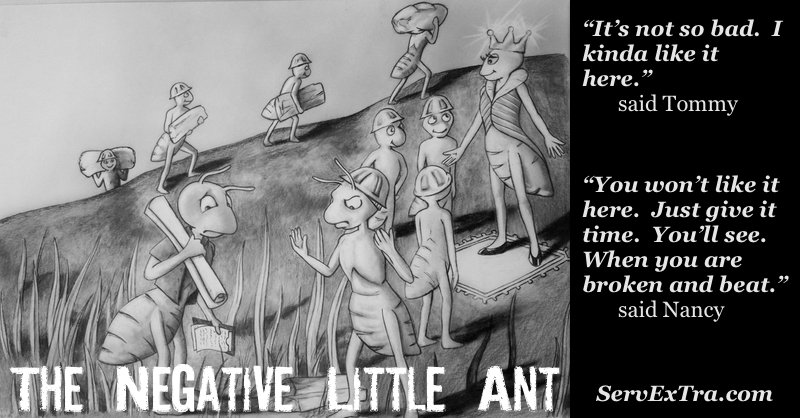 “You won’t like it here.  Just give it time.  You’ll see.  When you are broken and beat.”  said Nancy

“Are you going to leave?”  asked Tommy

Tommy went away and thought about what Nancy had to say.  Her words kept repeating in his head. “They have the better jobs, and they get the better life!”

Soon, Tommy began to see what Nancy saw.  From a distance, a happy face could easily be a frown.  Other jobs looked better than his.  And though he didn’t know for sure, he believed the Queen liked other ants more than she liked Tommy.

And with a thought, the ant colony had grown to 2 negative ants.

Tommy used to work cheerfully, but not anymore.

Tommy thought about leaving.  He pondered it often.  He would even sneak out to other colonies to see how they lived.  Related – 8 Warning Signs a Tech is About to Quit

But no matter where he looked, Tommy couldn’t see smiles.

So, Tommy did what Nancy did.  He talked.

“You won’t like it here.  Just give it time.  You’ll see.  When you are broken and beat.”  said Tommy

Before long, the happy colony was no longer happy.  The ants hated each other and the Queen.

Everyone stopped doing their work.  The forrest was no longer being cleared, and no one fed the colony.

The colony stopped growing, and then it died.

This story is not far from the reality of many poor companies.  One person unchecked can bring down an entire company.

How to keep the negativity out of your team