By Todd Liles • 7 keys to controlling your debt 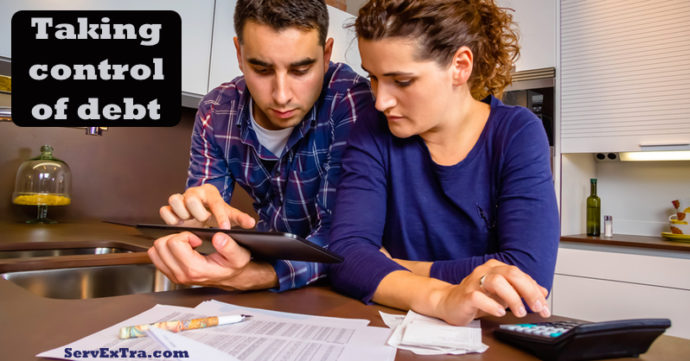 In the first part of this series, I highlighted the financial mistakes that I made as a young man right out of college.  Within 6 months I racked up a total of $45,724 in debt.  It was these mistakes that led me to implementing my Debt Survival Plan.

In this post, I’m going to go over the basics of my Debt Survival Plan:

I started with making more money, because I had a very basic money problem.  My recurring bills where just too much of my monthly income. My living expenses were not exuberant, so just reducing expenses wasn’t going to fix my issues.  I needed to make more money!

My need to make more money is why I started working in the HVAC trades.  Keep in mind, I worked for a scientific laboratory and environmental testing company before becoming a HVAC Tech.  So, for most, that may not make sense.

“How can you make more money working as a tradesman than for a professional company?”

The answer is “performance pay” and “adding value”

Working for an HVAC company gave me my first opportunity to work under performance pay.  The concept was super simple.

I liked that concept.  It was a very simple way to go from a flat salary, or hourly pay, to a system that encouraged me to work harder and smarter, and it worked!

That pace continued to grow, and in my first full year in the trades, I was over $45,000.  Not too bad for a 23 year old in West Monroe, Louisiana.

In my third year, I had earned the opportunity to be a partner in the business.  I was now killing it!  The CPA of the company even asked me the following question,

“Do you know that you will make more money than the owner this year?  Why?”

So, I fixed my money problems.  I kept the cars.  I paid my bills on time.

Now to be clear, I didn’t kill it out of the gate. I actually thought I was going to be fired. My sales sucked in the first 3 months.  So, my pay jump didn’t happen just because I “willed” it into place.  I had to work hard for it.  I had to increase my skills.  I had to create a system that worked for me.  I will tell you about those skills, and that system in the final post.  First, I want to tell you about taking control of your money.

Dave Ramsey was the mentor I needed, when I needed him.

His show played on the local station in West Monroe (where I started in the trades.)  His voice coming over the station was literally life changing.  He taught me things as I drove. His wisdom is obvious, but not often implemented.  Simple things like,

“Live on less than you make,” “Tell your money what to do,” and “Save money for your emergency funds.”

One of the most important things he taught me was,

“Lottery winners are broke after a few years, because you can’t give money to people that don’t know how to control it, and expect them to keep it.”

I needed to hear that lesson, and live it.  This is a critical piece of life knowledge.  Life is like the stock market.  You will have ups and downs.  If you live like there will never be downs, you will spend like there are only ups.  That will bite you in the butt if you are not paying attention.

I have experienced the ups and the downs of money.  In 2010, I was forced out of a partnership.  You could say I was fired.  This firing came after several years of putting in time on a start-up, and earning much less income than I had become accustomed to earning.  After the dissolving of my partnership, I was earning no money.   Yet, I survived and thrived because of my ability to control debt and make more money.

In the final post, you will get the system that I use to make more money

It is the same exact system that I teach HVAC Techs, Salespeople, Plumbers, and Electricians.

Question:  What is the most important key that you need right now to take control of your debt?  Please comment and share on Facebook and LinkedIn.