The problem with debt

By Todd Liles • The problem with debt 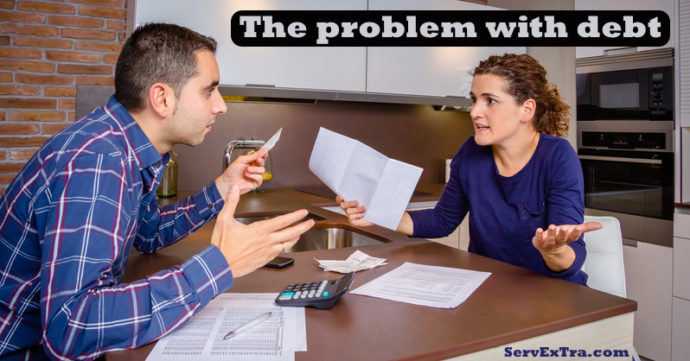 This series is a chronicle of the life events that have taken our family from debt to debt freedom.  The purpose of this post is the following:

In March of 2001, I was sitting in a plastic chair on the back porch of my sister’s house in Mississippi.  It was my nephew Caleb’s 2nd birthday, and there was a party happening.  Balloons were tied with streamers.  Kids were playing, and the mood was festive.

I was in a great mood too!

So, all of those things happened.  The job, the wedding, it all happened as planned.

Then the bills started coming in the mail.

While I was in college, my expenses were subsidized.  I had loans, a scholarship, and grants.

After college, all those subsidizes went away.  They were replaced with college loan notes.  In addition, I now had all of Shannon’s college expenses.   Her folks were very clear, “If you get married, you are no longer getting money from us.”

The bills started piling up!  However, I added more stress to my plate.  I was a young man ready to take on the world.  So, I did what ever young man with a new job does.

I immediately bought a new Ford car.  Then, I bought my sister’s Dodge Intrepid for Shannon.

When you take into consideration that we also had living expenses, it becomes clear – we were up to our eyeballs in debt!

We were strapped for cash.  It was a very bad time.  Literally living paycheck to paycheck.  Shannon had the bills timed out.  She would write them out, and send them in on the day that our paycheck was supposed to arrive in the mail.  She would then run down to the bank and make the deposits.

If one thing went wrong, we would bounce a check.  It was a high wire act with money.  Some seriously scary stuff.

Then, the worst thing that could happen – happened!

My employer sent me a bad check.  BOOM!  It bounced.  Then all of our checks bounced.  Total chaos ensued.

(Thankfully, Shannon’s mom and dad helped us.  They gave us $400.  Thank you Texas Nonna and Pop Pop for being there.  That $400 you gave us was a literal marriage saver.)

When the check bounced, I completely freaked out.  I was stressed, and began to look for ways to dump debt load.  The first person I started with was my sister.

“Melissa.  Hey.  Can we talk about taking your car back?  I’m freaking out!  I can’t afford all of these bills.”

My sister was awesome.  She did not take the car back.  Instead, she encouraged me to get control of my money first.  She said she would take the car back if there was no other option, but that would put them in a bind if she had to take that bill back.  (They had already purchased another car.)  To me, hurting my family was not an option to my money problems.

Finding solutions to my money problems

I was 21, and newly married.  In a matter of 6 months I had gone from a person that saw the world as a place of opportunity, to a place of debt and enslavement.  This could not be my life.  This is not the dream.  I refused for it to be my life!

So 2 things became clear to me:

I will continue this story in part 2.