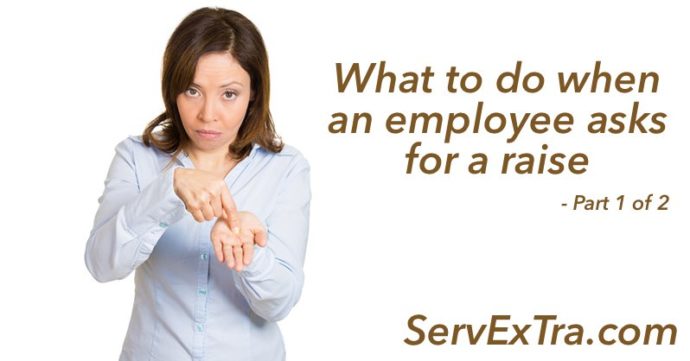 There are few things more stressful as when a team member asks you for an unexpected raise in pay.  Those precious moments following immediately after the request can have dire consequences.

Guiding your way to a productive conclusion is the purpose of this article.

Your emotions will vary greatly depending on your:

Let’s take a look at the most common reactions:

One of the most common emotional reaction to a team member asking for a raise is worry.  Specifically, “Is this team member going to leave if I don’t give him the pay raise?”

This is a common reaction.  It is also a reaction that may be purely unreasonable.  The reason why it this may be an unreasonable emotional reaction is the following:

Worrying about whether or not he leaves shouldn’t control your emotions.

However, there are times when the worry is rooted in the fear of a high producer leaving.

If your personality is one in which confrontation creates stress in you, then an employee asking you for a raise can cause great distress.

I know from manager testimonies, that many managers have reported suffering physical reactions such as:

This can leave you completely frustrated, and upset with yourself for acting in such a “weak manner.”  This can lead to a making a bad decision because your pride is hurt.

Anger is a common reaction a team member asking for a raise.  Often times I have had managers say to me,

“Where does he get off asking for a raise?!  I have put him through school!  Trained him!  Loaned him money, and supported his butt in the slow times with odd jobs.  I can’t believe he has the nerve to ask me for more money!”

Those same motivators that create anger in some, will produce hurt feelings in others.  “Hurt feelings” can be so powerful that is leaves you in a state of slight depression after the conversation.

I share this common emotional reactions for the purposes of communicating 2 points:

Before you speak, you need to listen.

The problem with listening is that some of you literally lose the ability to listen when stressed.  Audible muting an interesting psychological reaction that happens to people in stressful situations.  In essence, you lose the ability to hear.  Some lose the whole conversation, and some just lose parts.  The result is a state of listening confusion.  Some people have described it as listening through mud.

You may find yourself in a moment of audible muting if a team member asks you for a raise, and you are not prepared.  If this happens, then learn to gain cool control with the following script:

“John, when a person asks for a raise, it deserves my closest attention.  Allow me to get a pen and pad out.  I would like to take down your requests, and make a note of the points you are raising.  So, would you mind starting from the top?”

Don’t make any promises on the spot.

Your team member may very well be in line for a raise, or he may not be.  If you are being a diligent manager, then you already know that answer to the previous statement.  If you have not been closely watching the numbers, then you may not be prepared to answer the question.  In either event, given a “Yes or No” answer on the spot will not benefit either of you.

Creating the Mutual Plan of Action

In part 2 of this series, we will cover the 4 Keys to a Mutually Beneficial Pay Raise.

The information found here is part of the Service Management Program taught by Service Excellence Training.