How to Overcome the Guilt and Shame of Selling 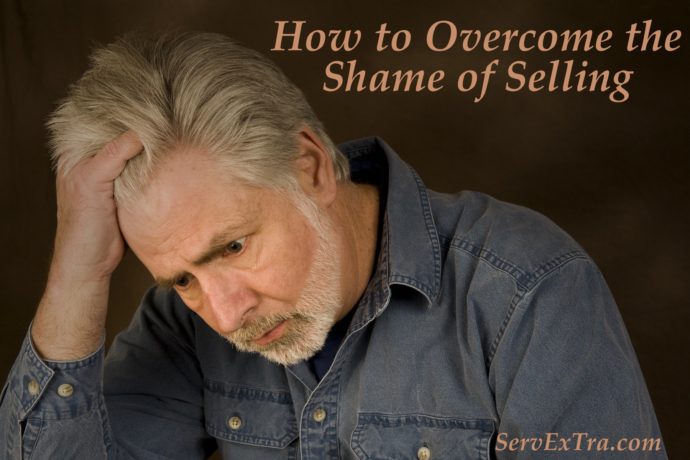 Many service technicians struggle with the shame of charging retail prices for their work.  This is an ever present problem with average tickets and closing percentages.  If the problem of shame and guilt is not resolved, then many of these technicians will find themselves stuck in a low paying jobs, or leaving the retail residential side of the trades.

The Root of Shame

Shame and Guilt are rooted in the fundamental belief that, “I’m doing something wrong, and should be punished for it.”

The interesting thing about psychology is that whether you are actually doing anything morally or ethically wrong is not as important as your belief of the wrong doing.

Growing up poor – The false belief of wrong doing

I grew up in Sanford Mississippi.  Sanford is an isolated community in the poor South.  Most people in Sanford take care of their own problems.  When something at our home broke, we fixed it.  If it was outside of our skill set, we called in a family member or a friend.  That was the way of life.    If you needed something done, you did it yourself, or you got a buddy to help you.  You didn’t pay for anything more than material and minor labor charges.  This is what it is like to grow up poor.

When you grow up in a do-it-yourself world, you naturally develop many skills that will help you in the trades.  However, you also condition yourself to have a false sense of guilt about charging for services that you have always provided, or received, for nominal fees.

The Power of Guilt

The inaction of a technician or a comfort advisor is often blamed on fear.  “He is too scared to close,” is often said amongst service managers and sales managers.

Most often, fear is not the inhibitor of action.  Actually, there a few things we know about fear:

Removing the Shame of Selling

The shame of selling can be removed through the right conditioning.  Noticed that I said conditioning and not training.

Training is the act of teaching a skill.

Conditioning is the act of changing behavior.

Through proper conditioning, you may be able to remove the shame associated with the guilt of selling.

Here are 4 steps that you can use in your reconditioning process.

4 Keys to Overcoming the Shame of Selling

The power of the group is one of the most powerful ways to recondition a thought process.  The sheer presence of other people that actually have pride in charging retail prices will begin to change the mindset of the person that struggles with shame.

The power of the group is one of the fundamental reasons why our PRESS PLAY Training Series does such a wonderful job of reconditioning the thought process of technicians and comfort advisors.

Give Examples of Happy Clients

The shame of selling will often prevent techs from every following up with a client.  They fundamentally believe, “The client doesn’t want to talk to me.  I overcharged them.  I can’t face them.”

By sharing the testimonial letters you have from happy clients, it begins to reveal to the tech that clients are still happy after the sell.

To make it extra powerful, get specific testimonies from the clients of the tech that is struggling.  Read those out loud to him, and his peers.

Educate the Technician on the Cost of Doing Business

A technician that does not understand business assumes the company is getting rich.  An educated tech understands that cost associated with doing business.  He then can understand that retail pricing is critical to the long term ability to serve and keep the client happy.

If the quality of the work being delivered is not up to par, then implement immediate changes to bring quality back up to par.

Fix quality, and you will remove the natural shame of a poor job.