The 5 Leadership Lessons of Jon Snow

By Todd Liles • The 5 Leadership Lessons of Jon Snow 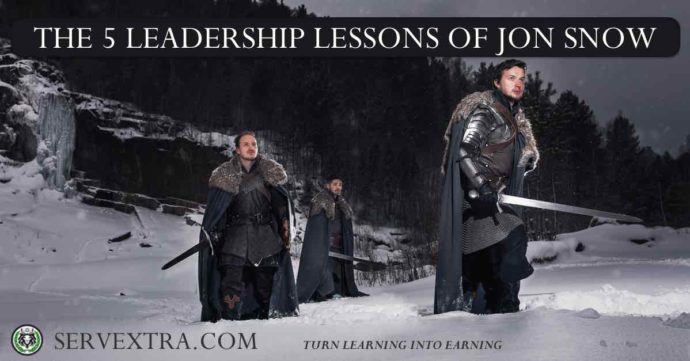 Jon Snow is everyone’s favorite bastard in The Game of Thrones. He is noble, kind, and just. Jon makes good decisions that build loyalty. (Except for the time it got him killed.) But even then, Jon followed his heart and chose what he felt was the best option.

Jon made a particularly tough decision when he chose to let the Umber’s and Karstark’s keep their family lands and castles.

For those of you that are not familiar with the Game of Thrones fans, allow me to give some back story.

Jon is labeled as the bastard son of Ned Stark. Ned Stark was the head of the family line of Starks, an ancient noble house.

The Starks ruled the lands in the North of Westeros. Westeros is a vast continent roughly the size of all of North and South America combined. The whole continent has been ruled under feudalism for thousands and thousands of years. Imagine a never-ending Middle Ages with small doses of magic, dragons, and zombies called “white walkers.”

In the past, there were 7 kingdoms. Each kingdom was once ruled by independent kings. The Targaryens, great conquerers who ride dragons, brought all the kingdoms under one rule. At that time, the Starks became Wards of the North, instead of Kings.

The Starks were good Wards. They treated the people of the lands fairly. The Karstarks and Umbers were great families that were under the Starks. They were loyal for generations, until the recent families decided to betray the Starks.

This betrayal resulted in the death of several Stark family members and allies. For a few short years, the Starks were without power, and fled for their lives.

In time, the Starks returned to power after a great battle with the betrayers. Jon Snow was thought to be the only living son of Ned Stark, so the people of the North decided to make him a legitimate Stark and name him “King of The North.”

In the battles that led to the Starks regaining power, the heads of the Umbers and Karstarks were killed. They are survived by a few family members. In a great hall, Jon sits at the head of the table as King. His sister sits to his left. The great hall is filled with the heads of the great houses of the North.

Jon is preparing his people for war. He commands that all people between the ages of 10 to 60 take up weapons and learn to fight, this is to include boys and girls.

This is where Jon met his first challenge, and teaches us his first lesson.

“You mean to tell me that I must ask my Granddaughter to fight?”

Before Jon could speak, the young Lady Mormount spoke out,

“All the people of Bear Island will fight! I will be training beside them.” Lady Mormont is a brave young girl of about 11 years of age.

This brought the argument to an end, and brought forth the first law of Making Tough Decisions, “Leaders Need Allies that Match the Challenge.”

Lady Mormont’s testimony was so powerful because she was a young girl that agreed with Jon’s decision to arm all people.

#2 – Leaders Must Be Prepared to Be Publicly Challenged

Jon’s next challenge occurred when he announced that he would,

“Restore the Karstark and Umber houses” to the current living heads of the houses.

This was met by great opposition from his sister Sansa.

She felt that the families should, “Have their houses stripped away, and given to loyal families.”

Jon argued that, “I will not strip the lands of a noble family for the sins of their fathers, and their fathers are dead.”

This did not sit well with Sansa, and they publicly feuded for a few moments.

This will happen as a leader. You will be met with constant opposition, and it will sometimes come from your closest allies.

When you are ready for these challenges, you will handle them with poise and grace.

Jon will often seek council in his decisions. He has proven to do that in the past. Yet, when Jon makes a decision that he feels is correct, he stands by it. Even when the council of his advisors is against his decision.

We see this as Jon holds fast to his decision when he says with a stern voice, “It is my decision, and my decision is final!”

This ended the debate between he and Sansa.

#4 – Leaders Show Grace to the Weak

He then called the head of the Houses of Umber and Karstark forward. You would expect to see 2 very strong men step forward. Instead, a young boy and girl under the ages of 12 stepped forward.

Jon asked them to pledge their loyalty to House Stark. The two drew their swords, bowed their heads, and pledged their loyalty.

I loved this moment in the show. It perfectly exemplifies who Jon is as a leader and as a person.

He could have easily taken all from the 2 families. They were at their weakest in life, and their whole lineage could have ended that day

Jon showed Grace. He chose to heal, instead of cause further damage.

A real leader will always chose Grace and gives healing to the weak.

#5 – Leaders Will Sacrifice for the Greater Good

Fan Note: I hope Jon Snow doesn’t face another death at the hands of his friends. But he could. He could give it all, again. And, if faced with the challenge of death, or doing wrong, I know that Jon will choose death. Which leads to the last point for today,  Leaders Will Sacrifice for the Greater Good. RELATED: Read The 5 Traps of a Service Manager

Question: Do you have a favorite Game of Thrones character?

What are some of the lessons you have learned from your favorite character?