How To Guarantee to Almost Die in a Basement 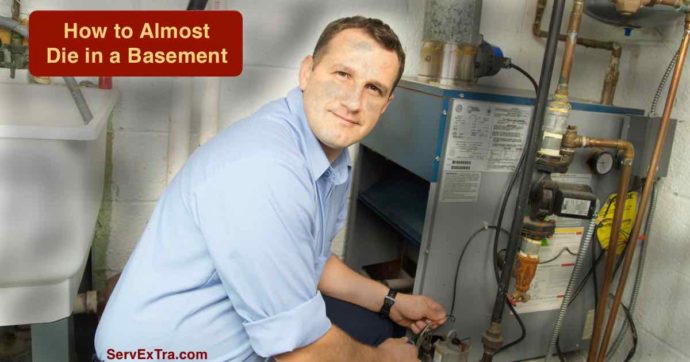 When I was a tech, I loved working on oil furnaces and boilers. I know that sounds strange but I did. I loved it. I got to use “real” tools with some heft, like wrenches. I could see everything I was fixing and put my hands on it.

You can’t hold refrigerant. (I tried once – another story for another time.) I didn’t even mind working on call or weekends in the winter because I knew most of my calls would be for oil furnaces or boilers. If it was very cold – in Virginia Beach that’s below 30° – I would “chase the oil truck” all weekend. (Those of you that work on oil systems will understand that. For those of you that don’t, it means that the burners that are running when the oil is being delivered are almost guaranteed to get clogged up. When it’s colder, burners are running more frequently and oil is being delivered more frequently thus more clogged burners.)

It was one of these cold nights on call chasing the oil truck that taught me some valuable lessons about safety and gave me yet another lesson on being prepared and and the dangers of overconfidence.

The Night I Almost Died

It was a Friday evening around 6pm. I was given my last call of the day before the office closed – no heat, oil boiler in a basement. No problem, I thought. Probably just got oil delivered that day (dispatcher did confirm this) and now the nozzle, filter, and pump strainer were clogged. No big deal. Replace all, Bacharach test, and done. Easy peasy.

As I got to the house, the owners were leaving. They were headed out for the evening. They told me to go ahead and take care of it and to send them a bill. Strange but OK. No problem. That was in the days of manual reset buttons on burner controls.

“How many times did you hit the reset button?” I asked the guy.

“Only a few times”, was his reply.

Customer says a few = until they got tired of it = whatever they say times 10.

They left and I headed to the basement. Sure enough, everything was clogged and it was saturated with unburnt oil from the manual reset being hit at least ten times. Thanks mister.

I proceeded to replace the clogged nozzle, filter, and strainer. I then did what I had done a hundred times. I opened up the boiler flues and started burning off the oil with my hand-held torch. (Not recommended. Keep reading to see why…)

Just like the other hundred times, the oil caught and started burning very slowly and lazily.

Then it started burning faster and more aggressively.

Before I knew it the boiler was on fire!

Not the normal way but the very bad way. Flames were coming from every crack in the boiler and flue pipe. The chimney was on fire. The basement was filing thick, black smoke. I had one thought:

I was going to die in this basement!

I ran up the steps to get the heck out of there and call the fire department. But the basement door was locked! It must have been locked automatically when it shut. I headed back down the steps and went to one of the tiny basement windows and popped it open. By that time, a neighbor had called the fire department and I could hear by the sirens that they were on the way.

Before I tell you how it ended, let me tell you a few things I learned that night.

A few things I learned:

Did the house burn down?

I went back up the steps and the door was somehow unlocked. It probably always was but in my panic I just couldn’t get it open. I met the firemen as I walked out the front door. By the time they went in they figured it was contained in the chimney and all was good. They didn’t even use the hose.

Thank God that the house didn’t burn down and I didn’t die in the basement. I got lucky, or was divinely protected. It could have gone the other way, but I’m thankful I lived to tell this story.

Got any stories of service calls that didn’t go as planned?

Please share in the comments or on Social Media.