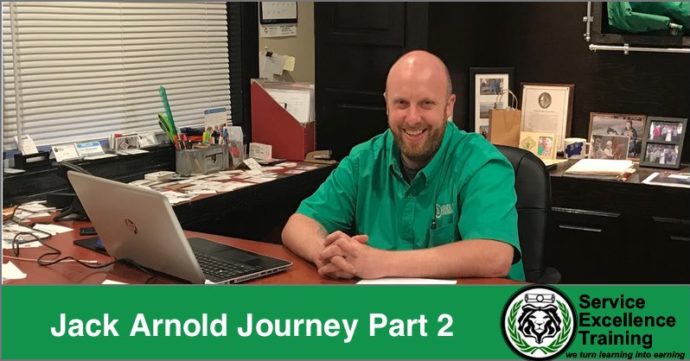 Jack hated coming to work. He hated going to his office every day. He would come into his office and look online for jobs. He almost took a job pumping gas at the airport. He wasn’t growing his business and had no hope that he would ever grow his business.

Then he found Service Excellence Training.

Here’ an update on Jack and his journey over the last several months.

He’s implemented a “ton of different things” – flat rate pricing, presenting multiple options to customers, using a diagnostic checklist, started a service plan program and moved to a new office. He’s also changed the culture of his business and improved his team. He’s on the right track.

What’s it been like for Jack to switch from time and material to flat-rate pricing with options? (3:38)

He’s learned how to build value for the client. He’s learned to use the diagnostic/safety inspection to build more options for the client. Before he was using a checklist, flat-rate pricing, and options, he was forced to give discounts and lower his price rather than “remove some of the items from the conveyor belt” to get the job. This just made sense to him and his customers.

Jack and I go through his numbers – both KPIs and financials – each week, we set up his hiring process, and we review DISC profiles. I hold Jack accountable for the things he needs to be doing in his business. Jack is a great student and I am happy to share my experience and other resources with him.

When we started his journey with Jack, he expressed his hopelessness about the future of his business. After the last three or four months, how has Jack’s perspective changed? (8:37)

Jack has learned to set goals. He now feels there are no limits to what he can do with his company. Even his old brother, Pat, who is also working for Jack, has noticed a big change. Pat says jack “wants to rule the world!”

Jack is a great business owner and a great man. He now has hope! He wants to grow his business to $10 million! I know Jack can do it. He’s turning learning into earning!

If you would like to talk to me about how Service Excellence Training can help your business, fill out the form below.