Who will take a risk with you?

By Todd Liles • Who will take a risk with you? 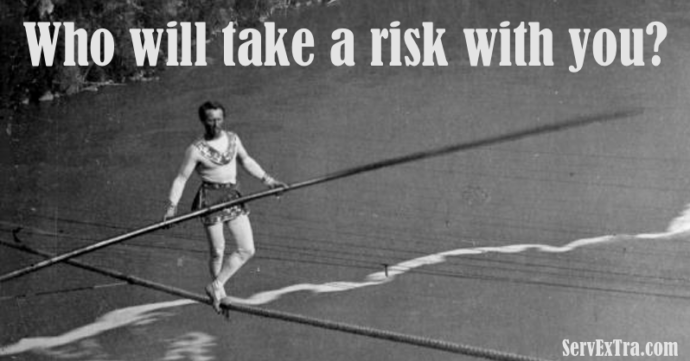 In 1859, a man named Charles Blondin took a chance.  He strung up 1,100 feet of rope over Niagara Falls, and walked across!  He was the first man to take such a chance, and he became famous for it!  He went where few men would go, and it made him a wealthy legend.

Blondin understood the importance of taking a risk.

But who would take that risk with him?

Legend says that upon his first trip across the Falls he asked the thousands of onlookers,

“Who believed I could make it across?” – Blondin

“We BELIEVED we BELIEVED!”- crowd

“Who believes I can go back again?” – Blondin

“We BELIEVE we BELIEVE!”- crowd

“Who believes I can make it across with a person on my back?” – Blondin

“We BELIEVE we BELIEVE!” – crowd

That is what it is like to be a business owner.  You are taking the risk.  There are people around you, like team members, that are shouting “We believe!”  Yet, when you ask them to “get on your back,” they won’t do it.

Eventually, a man did climb unto the back of Charles Blondin.  The man made the long journey across the Falls.  He wasn’t scared though.  He trusted Charles to succeed.  The man was Harry Colcord.  Harry was  his business manager.

Harry had a vested interest in the success of Charles.  He really did BELIEVE in him, and was willing to put his money where his mouth was.

Service Excellence Training believes in you!  I believe in you, and I’m willing to share the risk to prove it.

Here is your offer:

1.   Attend one of our amazing training programs.

2.  Get amazing results, or

The offer is that simple.  You get amazing results that make a huge impact, or your ask for your money back.

We believe in you, and we believe in us.  We are willing to take the risk with you, and put down a safety net.  You still have a small risk, because I won’t refund your travel money.  However, that is risk is very limited.  I have only had 1 person ask for his money back in all these years of training.

By the way, others have taken this chance many, many times before you!

Scott Irwin of Network Plumbing in Sydney Australia is a great example.

Scott continues to fly his people halfway around the world to train with SET.  Why?  Results.  Trust.  Belief.

Business is risky, and there are few that will risk with you.  We will!  Why?  Because, “WE BELIEVE IN YOU!”