TOO SPECIAL FOR A TRADE?

By Todd Liles • TOO SPECIAL FOR A TRADE? 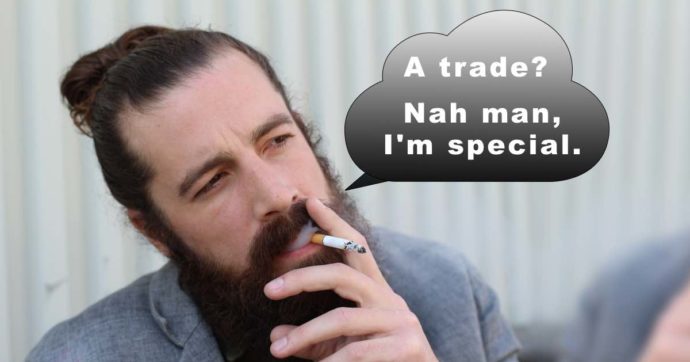 A guy with a man bun walks into a coffee bar. He sits with his friend, and they start talking about money.

The answer was somewhere between $40k to $50k No clear number stated, just a grunt and a head nod to indicate more than $40k and less than $50k. *Which I suspect isn’t true. It’s probably much less*

This guy is in his late 20’s, maybe 30’s. He has an art degree from the University of Texas, tons of student debt, and he floats between jobs.

His friend says,” How about a trade? I read in Forbes that the trades are growing, and you can make $100k pretty easy.”

“Yeah, but you also have no job. And you need some money. How’s that dream paying the bills?” says friend.

[callout]Some background on this story. It’s more or less what happened at the local coffee shop that I frequent. I witnessed it, because these two guys sat in front of me, and spoke at a volume that invited the world in.

You’ve met the ‘loud public talker,’ right? The guy or gal that forces the conversation onto you, whether you want it or not. Well, that was the fella I called Manbun and his friend. I originally posted this on Facebook, and it got a variety of responses. You can read the comments by CLICKING HERE.

Some thought Manbun was an idiot, and chalked it up to him being a ‘millennial.’ Some thought I was being insensitive to Manbun, and picking on millennials.

I was not picking on millennials.  I have great hope for the millennial, and have written about it here:  The Age of the Millennial.

Allow me to deliver the point I was hoping to make:

**The generation of Manbun doesn’t matter to me. His attitude is what I didn’t like. I don’t like that he thinks he’s too special for a trade. I do think his hairstyle looks ridiculous, and that’s my hangup, not his. I know hair doesn’t make person good or bad. Just to create clarity, we welcome all Manbuns to the trades. We will even pay for your haircut.**