By Todd Liles • 6 steps to become a Jedi Service Tech 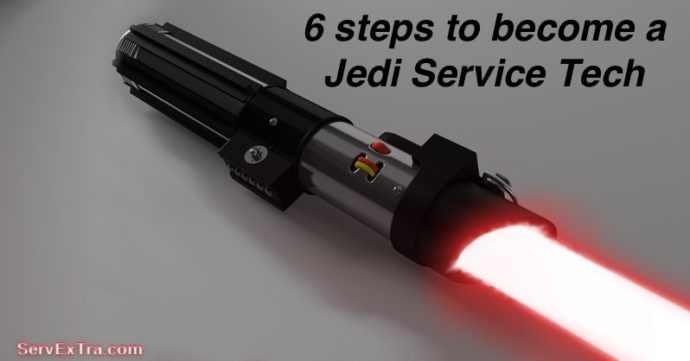 Luke Skywalker and the Service Tech share a common story.  Both are heroes, and both had to overcome great odds to become Jedi Masters.

As a kid, I loved Star Wars!  I wanted to be Luke Skywalker!

The story of Luke’s past and his journey to become a Jedi Master has always fascinated me.  It has always felt familiar in some way to my own life.

As I reflected on this familiarity, it became clear to me that I’m Luke Skywalker!  And, believe it or not, so are you!

The 6 steps and ways Service Techs are like Luke Skywalker

#1 – Humble beginnings: Luke was a simple moisture farmer.  He grew up with very little, and without his parents.  He never would have guessed the adventure that life had in store for him.

Most service techs have a similar story.  They grew up with little, and often without both parents in their lives.

I bet this is very similar to your story.  It’s almost identical to mine.

#2 – Hidden potential:  Deep inside Luke, The Force was always alive.  Let’s use The Force as an analogy for the potential that you possess as a HVAC, Plumbing, or Service Tech.

Long before Luke’s potential was recognized and nurtured, it stirred in his heart.  He felt the pull of a life calling.

This pull, this Force, existed in you long before you became a tech.  It made itself present when you were a child, and you would take apart your toys to figure out how they worked.

#3 – A Mentor In Your Life:  When the time was right, Obi Wan stepped into Luke’s life to guide him.  He began to show him the ways of the Jedi, and how to use the Force.

My Obi Wan was a man named Mike Bellissimo.  He became part of my life after I got off the farm in Mississippi, and after I graduated from college.

Yes, like Luke, many techs get a late start.

#4 – Frustration in Training:  Most Jedi start training when they are 4 years old.  Luke didn’t start his training until he was 17!  Compared to those before him, he had a very late start in the Jedi business.

This too is like the Service Tech.  Most Service Techs don’t get started in the Plumbing, HVAC, or Electrical trade until they are between 18 to 22 years of age.  This can cause serious frustration for the service tech as he begins to learn his trade.

Luke’s frustration hit a peak when Yoda began to train him.

Luke said things like, “I’ll try” and “This is impossible.”

Just like Luke, you will become frustrated during training.

#5 – Quitting for the Right Reasons:  Luke stopped his training with Yoda to go save his friends and family.  Luke knew he was going into a trap, but he had to take the risk.

Self-sacrifice is the trait that binds the Service Tech and Luke Skywalker.

Techs will often make sacrifices for the right reasons, even if the timing is bad.

I have seen techs leave great companies with dynamic training programs for the following reasons:

After a period of time, the service tech realizes that his life must get back on track if he is to live up to his potential.

# 6 – Returning to the Path of Training – Becoming a Master

Luke Skywalker becomes a Jedi master between the V and VI Episodes of Star Wars.

Luke returning to the Path of Training is not featured in the movies.  Yet, it is critical to the development of Luke as a Jedi.

Even though we don’t see the final moments of Luke’s training, or even know how he did it, it is clear that is was done.

This too is another way that the Service Tech is like Luke Skywalker.  Both will return to training to become the Masters they were destined to be.

So, now it is time to reflect on your journey as a Service Tech.   Have you reached the Jedi level, or Master level?  Is your training complete, or is it missing the critical components?

If you are ready to Return to the Path, and become a Master, then get in your X-Wing and fly to Austin. We are training Service Techs and Salespeople to be Jedi Service Masters in our PRESS PLAY Training Programs!