WHY YOU CRASH AFTER A BIG WIN

By Todd Liles • WHY YOU CRASH AFTER A BIG WIN 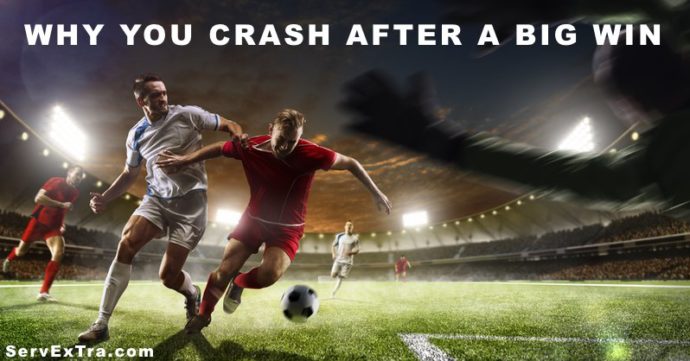 Have you ever notice how athletes crash after a big win? Think about Michael Jordan in 1993. He was at the height of his career. He had three NBA championships, an Olympic gold medal, and was making hundreds of millions of dollars in basketball and endorsements. And at the age of 30, he decided it was time to retire and hang up his shoes.

Actually, he traded in his Air Jordan’s for a pair of baseball cleats. He walked away from an amazing career, and decided to start over with baseball. BASEBALL!

Why did Michael Jordan walk away from a successful career?

You are probably not a professional athlete. You are a professional in your chosen field. Just because you’re not an athlete doesn’t mean you don’t share something in common with Michael Jordan. You may be close to a big crash, just like Michael was in 93.

Why Do Big Producers Crash

The Addiction of the Big Win

Big wins come with huge adrenaline rushes. There is a thrill to not only winning big, but working up to the big win.

Many people get addicted to the sense of urgency and importance. This adrenaline can push you through a long period of smaller wins.

At some point you’re going to win in a huge way! You may have landed the big project, or had your own championship like win. And this is great. The downfall of the big win, is that you are usually going to take a moment of rest afterwards. And any producer can tell you, it’s when you rest that you get sick and/or crash.

I’m not saying that you should avoid rest.  Rest is important, and we’ll discuss how to do it right.

Finding the Motivation After the Crash

Let’s return back to our story about Michael Jordan. He took a year off to play baseball. In his year of baseball he had an average batting percentage of .202%. To make it worse, he was in the minor leagues. Michael Jordan had done something he’d never done before, which was to fail.  RELATED:  How To Get Up After a Crushing Defeat

After this year of failure, he returned to the NBA.

I believe that Michael Jordan needed a year of losing. He needed to be reminded as to what motivated him in life. I’m in my 30s, almost 40, so I grew up on the Michael Jordan story. I know how his high school looked him over as a player. And how he fought hard in college to become the player he could be. Michael Jordan is a man that needs a challenge. So, in a unique way, failing at baseball was just what he needed for his motivation.

We can’t all be Michael Jordan. Which is to say, we can’t throw away our current career and return to it later when our new job doesn’t work.

With that in mind, let me give you 3 ways to avoid the crash.

Celebrate, But Not For Too Long

My father-in-law is a national champion. In 2005, he was the defensive line coach for the Texas Longhorns. They played USC in a hard-fought battle. The came down to the final moments when Vince Young crossed over the goal line for the winning touchdown! The crowd exploded in applause. The band started playing “The Eyes of Texas.” The city of Austin lit up their tower. And at home, my wife cried tears of joy.

When you win big, you should absolutely take a moment to celebrate. This is important. You earned the right to enjoy the moment. If you skip the celebration, then you are not giving honor to the hard work that you put forth.

When the celebration is over, it’s time to get back to work.

Many college and professional sports teams have lost the next year due to extended celebrations.

Celebrate, but not for too long.

Your energy is one of the most vital resources you have. In order to protect it, and maintain it, you must rest.

You need to think of rest in subgroups. Each group serves an important part in your ability to succeed daily.

I scheduled this rest with high priority. It is more important than TV, parties, or late-night work.

I realize that many of you are in service that can keep you out late at night. I strongly recommend that your company adopts a late-night policy. Which says in essence that if a person is out on late night calls, then they get the option to sleep in a later the next day.

There will be circumstances when you have to work on less than eight hours of sleep. In that case group #2 two becomes really important.

Naps are not just toddlers. Naps are the secret power source of many top athletes, CEOs, and technicians!

Just 30 minutes of nap time can get you ready for another 4 to 6 hours of hard work.

One of the best ways to take advantage of naps is to pack your lunch. Most people can eat their lunch in 5 to 10 minutes, and nap for the remaining 20 to 40 minutes.

In the service business, you’re going to work a lot of weekends. Which means, when you get a weekend off you want to have a lot of fun. Or, get a lot of housework done. Both of those things are important, but sometimes you need do nothing.

If you’re starting to feel fatigued, then it’s a good sign that you need a restful weekend.

On your restful weekend, let everyone in your family know at you’re resting. You’re not doing yard work. You’re not going to parties. You’re just sitting at the house resting and napping.

Americans tend to think of long vacations as taking a week off. And if I’m being honest, that’s about the extent of time that I take off in one block. Yet, I know there is power in the extended vacation.

Most vacations actually leave you worn out. That’s because you get a lot of work done in your time off. Or you go to vacation destination like Disney that leaves you exhausted.

To make things worse, many of you are still thinking about work for the first 3 to 4 days your off.

An extended vacation gives you the time you need to “turn work off” and “turn rest on.”

Two weeks is about the appropriate amount of time for vacation actually do its work.

If you have never taking a long vacation, then this is going be hard for you to accept. I’m in that boat. I haven’t taken the long vacation since opening Service Excellence Training.

I challenge you to take an extended vacation next year. And, I’ll challenge myself to do the same.

Goals are like a compass. They give you direction.

After a big win, you may feel like you’ve lost your sense of direction.

To regain your sense of direction, you need to set new goals. A new goal will give you a new challenge.

The new challenge will give you motivation, energy, and direction.

A superstar tip is to always have more than one Big Goal. I personally have 10 big goals for 2016. I have already completed one of those goals, and I’m close to finishing with two other goals. Having the other seven goals keeps me working hard and focused.

Question: Have you ever had a big crash, and what did you do to get started again?