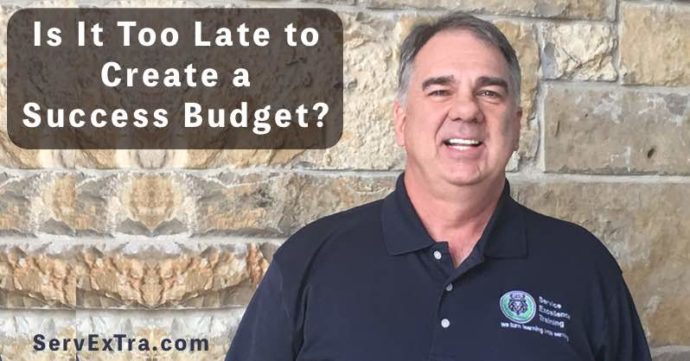 Joe is a great guy and a good contractor. He delivers consistent service and his customers like him. He gets good customer reviews…when he remembers to ask for them.

The problem is that Joe’s business has been basically flat for the past 3 or 4 years. Even worse, profits seem to have slowly dwindled down. Some years are up a bit, but it seems the next year the loss is just as big as the previous year’s gain.

What should Joe do?

What is the solution for him to get his business on the growth track?

What is a business budget?

Is it a spending guide or a revenue guide? What if I said it is BOTH?

Without a solid financial plan, Joe’s odds of success are about the same as buying a lottery ticket. How are things working out for him so far?

There are five essentials to mastering Joe’s financial plan.

Let’s talk about the first two of these essentials in this blog.

This gives Joe a base to begin building his business growth. Until he has a plan in place to outpace his monthly breakeven, he is in no position to have a profitable year.

Some owners “fly by the seat of their pants” and hope the summer months will produce enough profits to cover the later winter and fall months.

What if Joe had a plan to at least hit breakeven in the slow months? Would he then be able to double or triple his breakeven goal in the prime months of service? How would this impact Joe’s annual profitability?

Contractors that have 15%, 20%, or higher annual net profits before taxes win the business game in the slower months by having a plan to still hit breakeven every month. It’s not as difficult as Joe thinks. He has just not seen this kind of strategy before, so he thinks it isn’t possible.

Joe doesn’t know that most growing companies have very similar revenue percentages from year to year. If Joe knew what percentages to aim for in Q1, is it possible he might avoid ending up in the red at the end of March?

Joe doesn’t know about this, so his guys do not have a specific target they are aiming for.

Plumbing and electrical companies typically do better in Q1 and Q2 than HVAC companies, but not as well as they do in Q3 and Q4.

As Joe reads this he thinks –

“It must be really complicated.”

“Maybe this is not so difficult after all.”

What does this all this mean for Joe?

It means that Joe needs a solid plan. Both men and women work harder when they have a target to hit. With a target in mind, they can keep score on whether they won or lost. Most people will play to win!

Once Joe has a financial plan, he can set realistic goals and build a realistic marketing plan, a service call strategy, bonus and reward systems, and predict his number of installs, maintenance clubs, and revenue for all four quarters with accuracy.

With a solid plan, Joe is likely to find he did better than he planned, but seldom will he do worse. Why is this?

People try harder when they have a realistic goal.

Joe would sure like to see his team try their best on a weekly basis. How can he get everyone on board? Will some of the processes that work for other companies actually produce similar results for Joe?

Stay tuned for more answers in my next Blog. We will discuss how to turn service calls into more replacement installs and maintenance club members. Joe might be interested.