A hero and a lesson

By Todd Liles • A hero and a lesson 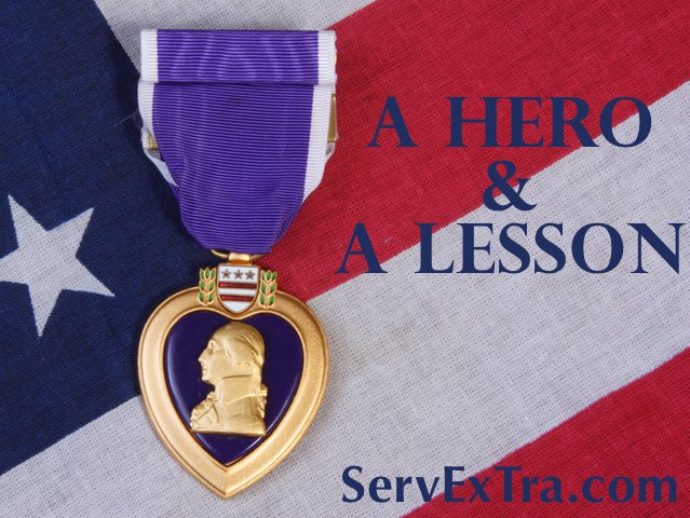 I expected to only buy desserts in the pie shop, but I met a hero and learned a very powerful lesson.

“Your daughter is beautiful.”  A man standing at the counter said that with a pleasant smile.

Willa smiled sheepishly.  She always blushes from a compliment.

I looked up to see a tall handsome hispanic gentleman.  He was bouncing his 5 month old son in his arms.  His son had big brown eyes, and they were shaped like almonds.  He was handsome just like his dad.

“He’s 5 months old.  And what about your son?” asked Shannon.

Shannon and he exchanged pleasantries about the boys for the next few moments.  Then they talked about the girls. Then about other things like hair and heartburn; and how one child is like momma, and the other is like daddy.

Going for another bite of pie, I looked at my fork. In that moment, I noticed his legs.

From the knees down, they were prosthetic.  His legs were modern, articulate, and strong.  Then I looked at his hands.  They were scarred.  His left hand was burned, and one finger slightly rested atop the other.

Then, I understood.  Without asking, I knew he was a hero.  He was a soldier that had lost blood and limbs.  He has sacrificed, and would have sacrificed more if needed.

Out of the need for politeness, curiosity, and a longing to recognize his sacrifice, I ask “Are you a soldier?”

“Not any longer.  Honorably discharged.  I was a Marine.”  He was proud.

“Were you injured in war?”

It hit me that I probably shouldn’t have brought it up.  I really don’t know the correct protocol for this sort of thing.  So, I decided not to ask any more questions about his injuries.

I simply said, “Thank you for your sacrifice and service.”  He said, “Yes sir” with more respect than I deserved.

“A hero is a soldier that fought for a cause.  He is a veteran.  Can you say, ‘Thank you for your service?’ ”

“Thank you.” She said softly.

Honor A Veteran in the Comments Below