Don’t pass when a run will work

By Todd Liles • Don’t pass when a run will work 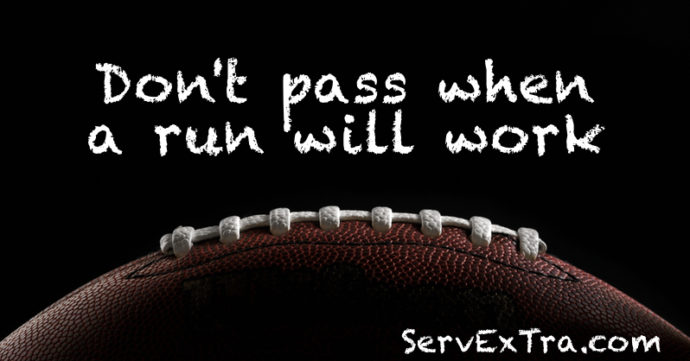 Super Bowl 49 was over the moment Russell Wilson threw an interception pass in the end-zone with less than a minute to play.  This was a heart breaking way to lose.  Not because of the interception, but because of the bad decision to pass the ball when a run would have won the game.

Why didn’t they let Marshawn Lynch run the ball!?  Are they crazy?  An offensive coordinator will be fired today.

That is a direct quote from millions of Seattle Seahawks fans.

Before the Seattle fans skewer me, and the Patriot fans give me a high five, you need to know that I am a Packer’s fan.  Always have been, always will be.   You need to also know that I recognize the hard work and talent on both teams.

Now, back to the bad decision of passing the ball.

I have made the same bad decision in business, just as you have:

There is value to the pass:

However, the pass has consequences.

The consequences of going for the pass, when a run would do:

I believe the great Vince Lombardi said it best:

Gentleman, this is a football. . . You will learn to run with it, block for it, and tackle for it. . .  You will learn to pass it, but only when needed. . . There are 3 things that can happen when you throw the ball, and 2 of them are bad.

No one wants the pass to go away.  We love the excitement of the pass.  However, when a run will win the game, you should run.