By Todd Liles • Breaking the Fear of Engagement 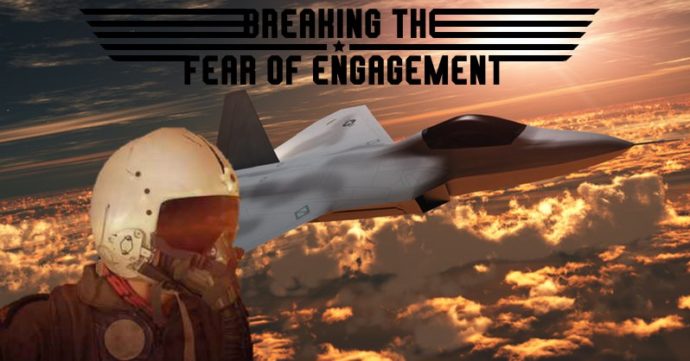 In Top Gun, Maverick represents the type of man we all want to be.  He is strong, handsome, wins at life, wins with the ladies, and flies a freaking fighter jet!  Right now I bet you are singing, “Danger Zone” in your mind, aren’t you?  Going to take it right into the danger zone!

However, Maverick had a few bumps in the road on his way to becoming Top Gun.  He suffered a terrible loss, and developed a massive Fear of Engagement.  His fear almost grounded him, permanently.  He recovered, and saved the day.  Unfortunately, not every hvac tech, plumber, or salesperson recovers from his Fear of Engagement.

What creates the Fear of Engagement?

Maverick lost his cool when his wingman Goose died.   The same thing happens to service techs and salespeople.   The difference is in the name.

Every tech has a wingman.  Codename:  Wolverine, real name Confidence.

Confidence is a great wingman.  He is tough, and can take a lot of bullets.  But when he goes down, he goes down hard!

All techs need a wingman, so with the absence of Confidence, a new wingman flies into position.

How do people react when they are dealing with their Fear of Engagement?

Most techs don’t directly show their fear.  If they did, they would quit this game all together.  Instead, they mask it with 2 other faces:

I know one tech that lives his life Angry.  Seriously.  He is constantly mad.  If a homeowner doesn’t buy, his default is to get extraordinarily pissed off.

A little bit of anger can serve as a proper motivator.  However, too much anger leaves you weakened and vulnerable.

By now, you know the dangers of out of control anger.  (Increased heart disease, bad relationships, less money in your pocket.)

That kind of anger poisons the lives it touches.  Deal with the fear, and let it go.

Here are some examples of a sympathetic excuses:

“I get where they are coming from!  This is expensive.  They have kids.  I know I couldn’t afford this.  They will call back when they have the money.  I know they like me, so I won’t  push them.”

Similar excuses are used with other people that have a Fear of Engagement.  Other grounded pilots like these excuses:

The service tech that has lost his cool makes sympathetic excuses.  He then gets angry at those who would point out what is going on in his head.  (Bring it!  I’m not concerned about hurting your feelings.  I’m concerned about getting you to truly engage!)

Overcoming fear is tough.  It’s not as easy as saying, “Get over it!”

You will not live the life you deserve, and have the influence you need, until you master your fears.  So, I’m going to help you with your fears.

3 Practical Tips for Breaking the Fear of Engagement

#2 – Specifically name your fear – if you can name a thing, you can control it.  Be specific about the name of the homeowner that destroyed your confidence.  Detail the situation.  Don’t let anger come back into the equation.  Anger is a butthole that wants you to lose focus.

#4 – List the benefits for facing your fear –  Your benefits are unique to you.  There is more to life when you conquer your fear of engagement.

Jeremiah 29:11 – “For I know the plans I have for you,” declares the LORD, “plans to prosper you and not to harm you, plans to give you hope and a future.”   (This is the life-verse for Shannon and I.)

When was the last time you had your skills sharpened?

The benefits to training are the following:

There are many ways to train.  If you want to train with the best, then come see us in Austin at one of our PRESS PLAY events.

The final step is to Engage!  The first 5 steps mean nothing if you don’t take flight.

Get back into your fighter jet and soar baby!  And when Fear comes up on your 6, then you and Confidence – Codename Wolverine, shoot that son of a gun down!