Five Keys to Training a Team According to a Navy Seal 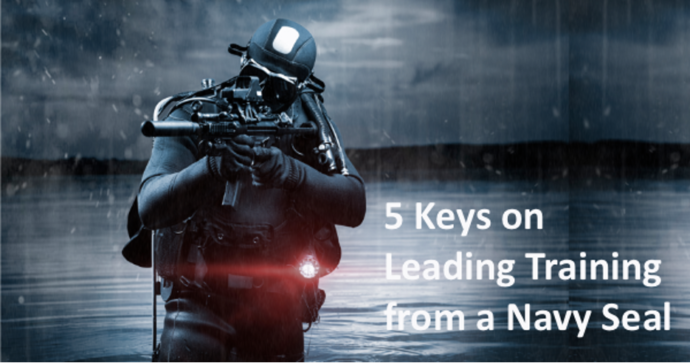 5 Keys on Leading Training from a Navy Seal

In 2002, I was responsible for training a group of older technicians. I had limited skills compared to the rest of the team. I also had limited life experiences. Most were married with kids, and some had grandkids. They were all deeply tanned from the years of working in the sun. These were all fine, hard-working men, and compared to me, I was a baby fresh out of college.

Yet, I still had the responsibility of training this team. My job was to communicate the knowledge that I had gained at a training class. I also had to make sure the other men could successfully operate the new technology in the field when I was done training them.

This was no small task, and I knew he would be in trouble if he screwed this up. Thankfully, Mike Watson helped me prepare to succeed.

Mike Watson was the right-hand man of the owner. In his youth, he was a Navy Seal. In his later years, Mike was hard as nails, and one of the best mechanics I ever met. Mike also understood people. His time as a Navy Seal taught him many useful insights on how to lead by example. Mike graciously shared many of those lessons with me, and now I will share them with you.

People follow the leader. The leader is in the front of the back. When you are leading your people, it’s important to go first. Whether this is a demonstration of communication or a new technical application. going first proves that you have the credibility and ability to perform the training.

One of the ways that I went first was by working in the field and doing some of our first start-ups.

2. Offer Help, but do it with Humility

Well, your ego is not your amigo.

When you are in the position of leading, lead with humility. Ask them if they would like to know what you know. Humbly let them know you are there for them.

3. Be Strong in Your Convictions

“You know you have their respect when you give them a good ass-chewing and they thank you for it.” Mike Watson told me this after some trouble with a few of the older guys in training. He recommended that I strongly express my convictions. That I make my point clear about what the objectives are, and their part in the process.

These conflicts are going to happen. It’s a normal part of human interactions. The key to navigating through these conflicts is mutual respect.

4. Keep the Rules of Engagement Simple

I believe that one of my superpowers is the ability to break down complicated processes into simple steps.

Many trainers try to teach everything all at once. This is a big mistake. You will be more successful if you break down a roleplay or a technical procedure into small steps.

5. You Win and Lose Together

Real teamwork means we depend on each other. One of the most powerful examples of this was a story from Mike’s Seal training.

“We were engaged in a training exercise that had us in the freezing water for hours. When we came out of the water, our instructor said the only warmth we were going to find was going to come from each other. We formed a circle and hugged each other. I had my head on a man’s shoulder and another had his head on mine. We were either going to bond as a team, or we were going to freeze to death.”

This is the heart of effective practice in training. You have the back of your teammate. When you practice, you do it to make the other person better.

Sometimes that means you really push them to new limits.

Sometimes that means you nurture them when they are down.

Always it means we win or lose together.

These are the lessons that Mike Watson taught me 20 years ago. They have served me and Service Excellence well. When you are preparing your next training sessions, use these keys to have your best experience.

Question: Which of the 5 keys will you use in your next meeting?