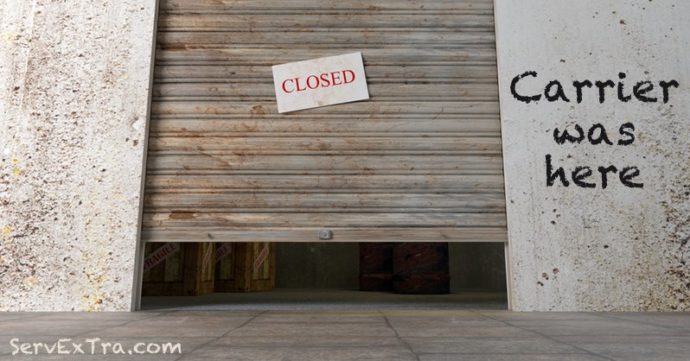 Carrier will be closing their Indianapolis Air Conditioning Manufacturing plant.  Over 1,400 jobs will move to Monterrey, Mexico.  Many proud American contractors are highly upset.  I know, because I have read their Facebook posts.  But, what about Carrier?  Do you think the Carrier Corporation cares about their workers and the opinions of their clients?

I think Carrier cares about public US opinion.  They just don’t care enough to lose money over their sentimental feelings.  And, Carrier believes they are losing substantial money by continuing their Indianapolis manufacturing operations.

A Brief Study of Carrier’s History of Closing Manufacturing Plants*

Between the years of 1992 to 1995, Carrier closed roughly 100 manufacturing plants.  These closures resulted in over 11,000 jobs being eliminated.  *I do not know if all of those plants and jobs were in the US alone.  Though I suspect they were world wide, and not isolated to the US.

So, what was the result of all of those closures?

Carrier reduced their overhead by 12%, and tripled their profits by the end of 1995.

Wall Street would say that Carrier made some very sound business decisions during that time frame.

Between the years of 2001-2003, Carrier closed their Syracuse Manufacturing Plant and moved production to China.  This move made a lot of sense for Carrier, because they were betting on the growing Pacific Economy.

Their profits jumped by 54%.  Revenue growth was moderate at 4%.

The bottom line is exactly why Carrier decided to close the Indianapolis Plant.  They are looking to increase profits in a very “price sensitive market.”  The past has shown US closures to be a smart move.

Many analysts are calling Mexico the next China, and South America is also positioning for huge growth.

Will The Power of Social Media Make This Closure Different?

I graduated from college and began my HVAC career in 2001.  In 2002, I received training from the Carlyle Compressor division of Carrier out of Syracuse.  I had no idea that Carrier was closing their Syracuse Plant.  In 2002, plant closures were a topic for the effected locals and the heads of industry.

Today, Social Media has changed everything.  Social Media has made it much easier for people to connect and communicate on topics that the masses would consider niche.  And, the HVAC contractors are talking!  I have seen with my own eyes comments such as, “I will not be attending this year’s dealer meeting” from one of Carrier’s Largest Residential Contractors.

With all that being said, I do not think that even Social Media has the power to cause Carrier any long term negative impact based on this one decision.

Carrier is just one component of a massive multi-layered, multi-billion dollar corporation.  These corporations are ran by very smart people, and they always have profits in mind.  I have no doubt that people with much more energy and time than I possess, have analyzed the impact of this move.  Social Media was part of the equation.  In the end, Carrier decided that this move was best for them, no matter how many times you talk about it on Facebook.

I guess that depends on which side of this move you are sitting on.  As a US citizen, I want the jobs to stay state side.  As a capitalist, I want Carrier to thrive as a company.  I’m sure there are still plenty of jobs here in the US that depend on Carrier being healthy.

In the end, companies will choose to manufacture their products in ways that make them the most money.  If we as US citizens impact Carrier’s top and bottom line enough, then perhaps they will choose to stop closing US plants.

*Facts referenced in post come from Encyclopedia.com You can read them all here: https://www.encyclopedia.com/topic/Carrier_Corp.aspx