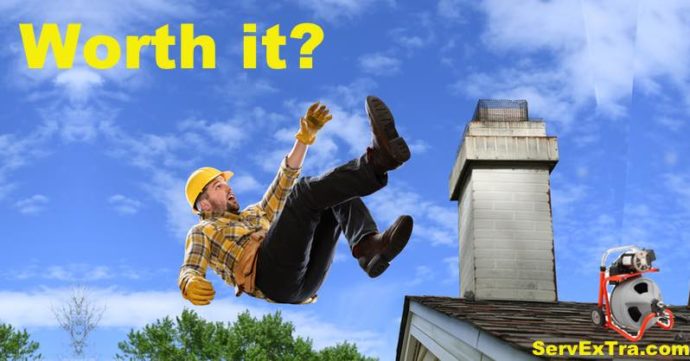 All of these things might be found on a roof…But only one of them costs over $120,000 by being on a roof. Think you know which one? Read on to find out.

In 2014, a plumber went on a roof. He was experienced and had great intentions. The homeowner had a clogged drain. He arrived and assessed the situation. He found the clog and discussed with the homeowner. She agreed to have him clear the drain. He went to his van and got his portable drain cleaning machine. All was good until…

…He realized there was no clean out on the house.

He quickly reassessed the situation. He didn’t want to tell the customer he missed a basic thing like that. He was an experienced plumber who should have checked to see if there was an accessible clean out. Besides, the customer wouldn’t want to spend another $800 – $1500 to have a clean out installed. He reasoned with himself that he could save the homeowner the extra expense, and cover himself, by clearing the clog through a vent stack on the roof. He made the decision what to do without speaking with the homeowner. He had great intentions, after all.

The Plumber got his ladder from his truck and climbed onto the roof with his portable drain cleaning machine. All was good until…

…He fell off the roof.

…And broke his ankle.

Here’s what the great intentions cost:

All this to save the homeowner $1500. I’m sure everyone involved would have rather spent the money for a clean out than spend the money and time dealing with the issues.

Many of us have made this type of decision for selfish reasons (to cover something we missed), and/or good intentions for the homeowner. Even though it may have worked out before, and in most cases, all it takes is one like this to cause a lot of problems.

Always give your customer the respect of letting them decide what is done to their home and property. You may have the greatest intentions, but it’s still the homeowner’s decision. Educate them completely about their options, and use your experience to help them choose. It’s the professional, responsible, and less risky way to do it. CHECK out our Classes

Question: Has your “good deed” ever caused you more harm than good?