We Don’t Need No Stinking Checklist

By Todd Liles • We Don’t Need No Stinking Checklist 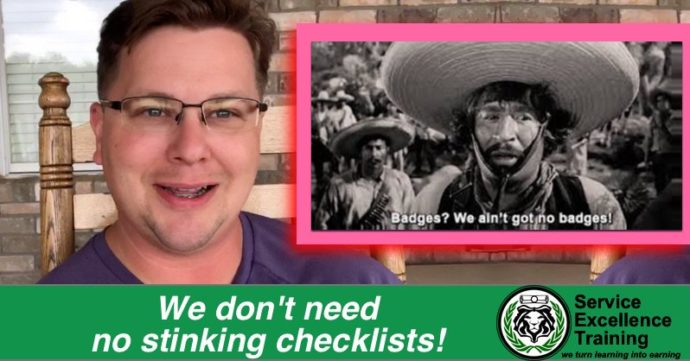 One of the most iconic scenes in any Western Movie is in The Treasure of Sierra Madre. Humphrey Bogart is playing a gold miner, and Alfonso Bedoya is playing a bandit set on taking the claim.

Bedoya’s character attempts to bluff Bogart by claiming to be the Federales. Bogart says, “Prove it. Show me your badges.”

The scene works so well because it is a battle of wits between two people at odds.

I’ve seen this scene played out in real life. It goes a little something like this:

Manager: “How did the tune-up go?”

Tech: “Checklist? I don’t have to show you any stinking checklists!”

Manager: “If you were really a great tech, that did a great tune-up, you’d have a checklist. Show me your checklist.”

How many times have you been in this battle?

I bet you were in it yesterday!

This is a dangerous battle between Managers and Techs. It’s one that can lead to client, tech, and manager dissatisfaction.

Thankfully, there is a solution to this challenge, and it’s one that ends with all walking away uninjured.

In today’s training video, you are going to hear about:

You will also learn about the critically underused principle of:

Today’s training video is one that you should share with your team in your next training session.

VIDEO: The Battle between Managers and Techs

Question: Do you have a horror story over a checklist battle? Share your story by sending us a video to our Facebook page. We may just feature in an upcoming post.