8 Warning Signs a Tech is About to Quit 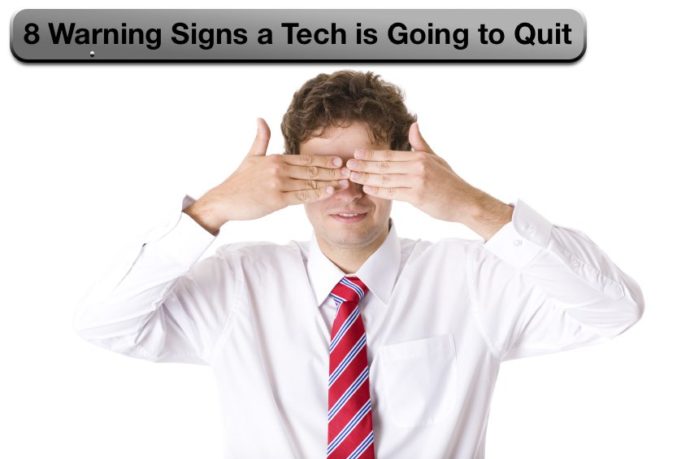 Have you had a tech quit at the worst time?    Let me ask it another way, “Have you ever been the tech to quit?” There are always plenty of warning signs that a tech is about to quit his job.

You need to know the signs, because a tech will quit his job when you least expect it.  That’s the problem, you didn’t expect your tech to quit his job.

Important Note:  This post will not bash techs. Not at all! I was a technician first, and damn proud of it!  This post is meant to create clarity for the business owner, and the technician.

The Top 8 Warning Signs a Tech is About to Quit

1. After great emotional distress, such as divorce or family loss.

I’ve been here.   I was part of an amazing company, in an amazing position, then my grandfather died. This was a big deal to me because I loved my grandfather so much.   Now it’s true that I was living away from home at the time which made it worse. I submitted my notice to my team leader.  However,  I did not quit my job.  Thankfully, I had a good team leader that gave me the time I needed. This allowed me to grieve, and come back to work.

2. After a leader in the company quits.

This can be a technician or a manager.   A leader isn’t defined by a title, but by followers.   If a leader leaves, don’t be surprised if people follow.

3. After a “meeting” where an employee was embarrassed in front of his peers.

A lot of these warning signs I learned the hard way. Even I have violated rule number three. Now I haven’t done this in a very long time, but I have embarrassed an employee in front of his peers.

When you do this, man up and say “I’m sorry.”  Make your apology in front of the group.   In addition, make it up to the team member privately.

4. After the promotion of one employee over another in a position they both wanted.

Losing a promotion is a very stressful thing. You have to face embarrassment and some self-doubt. Don’t lose a fantastic employee because you didn’t know they had internal questions. Sit down with them and explain why they didn’t get the job. Also, explain why they are valuable and much needed.

5.  After there is a dispute over money.

This is always touchy. This is also one of the reasons why I left my very first company. I was earning great commissions, and people began to grow jealous.  This led to an eventual confrontation, and then an ugly dispute.

When it comes to money, be clear, put things in writing. Always be on the side of your team member. If it was unclear, accept responsibility for being unclear. That means settle the dispute quickly and accurately.

There is nothing like a Disney trip to make people want to quit.   This must be one of those unwritten goals that we all know is true. Boss goes on vacation, and somebody quits.

Here’s my thought, some quit because they needed a vacation too!  Seeing you take a vacation just rubs salt in the wound.

Some people quit when you take a vacation because it’s easy. Speaking as a technician, and I hope speaking for other techs, real men don’t do this.

7.  When an employee starts saying to you: “My old boss called me the other day.”

When a team member starts talking about the “old boss,” then you know what he is thinking!

Download this Free Ride Along Form: Inspect what you Expect